WJCNY has officially established an office location in Hawthorne, NY to address significant unmet need for legal assistance in labor and employment law matters among low-wage workers in Westchester County. This geographic expansion coincides with the launch of WJCNY’s partnership with Westchester Labor Alliance (Alianza Laboral), a vibrant coalition of five community-based worker centers located throughout the county. Supported in part by funding from the Westchester Community Foundation, WJCNY conducts regularly scheduled free legal clinics at each of the Alianza Laboral worker centers. WJCNY staff attorneys provide consultations and, when appropriate, represent workers in litigation matters to combat wage theft and other labor abuses. We also work closely with worker center staff and Alianza Laboral to develop organizing and advocacy campaigns aimed to affect systemic change. Already, WJCNY and Alianza Laboral have succeeded in recovering hundreds of thousands of dollars in unpaid wages and other compensation through our impact-oriented litigation. 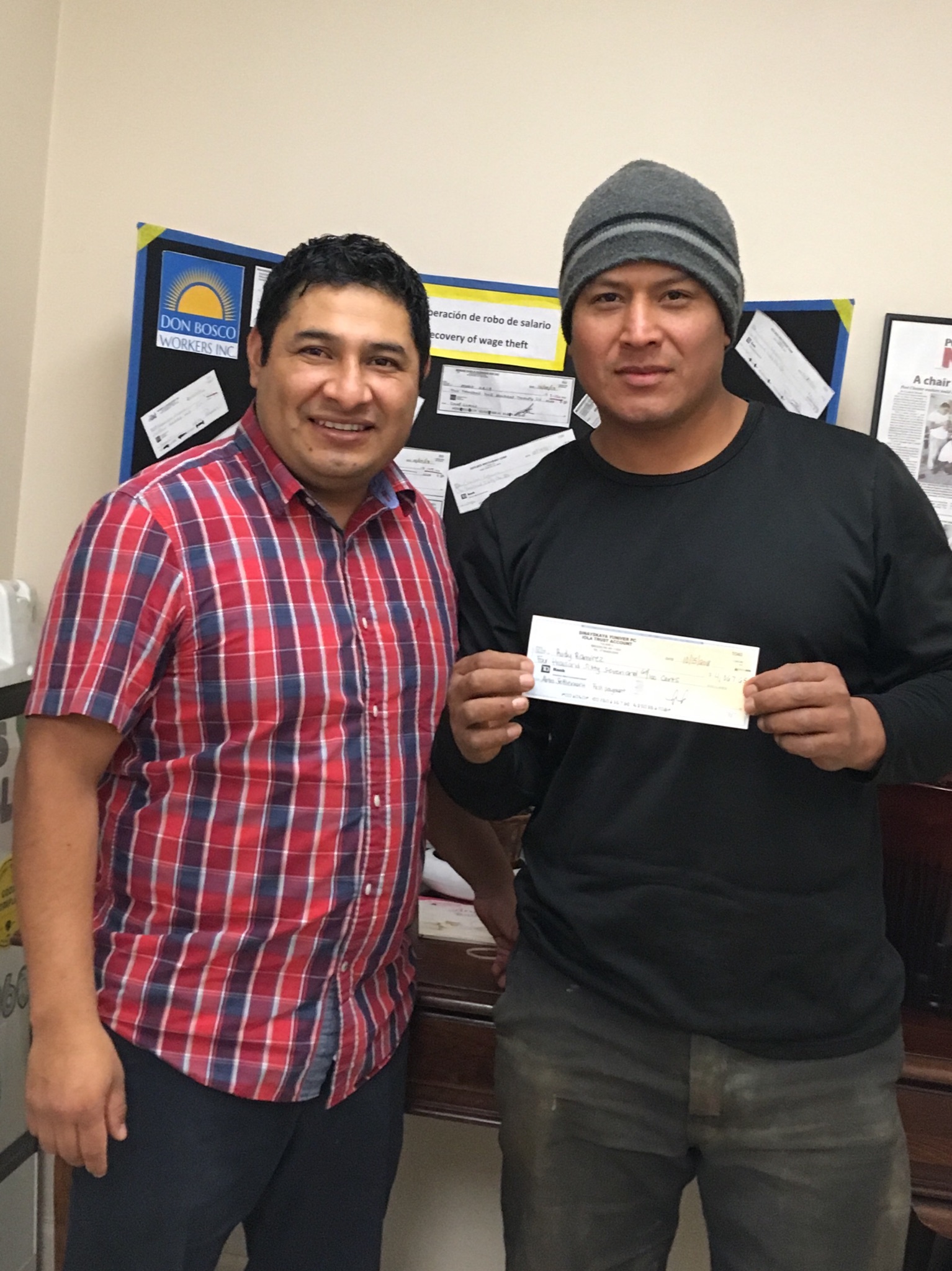 Rudy Ramirez and Roger Aleman were hired to perform heavy construction work in the Bronx, NY, where their employers sought to quickly erect a major building to be leased for commercial purposes. As Rudy and Roger were pushed to work day and night, their employers cut corners, failing to pay for overtime work and ultimately stopping payment of wages altogether. After several weeks of working without pay and substantially completing the construction project, Rudy and Roger were summarily fired by their bosses who refused to pay them anything whatsoever. Rudy and Roger sought help from Don Bosco Workers, a vibrant worker center located in Port Chester, NY, and were then connected to attorneys at WJCNY who filed suit in U.S. District Court on their behalf.  After almost one year of litigation and with significant support from Don Bosco Workers, WJCNY succeeded in recovering more than $50,000 for Rudy and Roger, including their earned but unpaid wages. Rudy Ramirez is pictured above (right) with Gonzalo Cruz (left) of Don Bosco Workers.

For years, employees of Rosann Landscape Corp. were required to begin working as early as 5:00am, transporting and unloading equipment to their work sites in New York and New Jersey. However, the workers were never paid for these and other mandatory hours of labor they performed while servicing large residential developments where they did long hours of physically strenuous landscaping and maintenance work. Routinely, workweeks at Rosann Landscape Corp. totaled more than 55 hours of work for each laborer, but no employees received overtime compensation as required by law and many received less than minimum wage during certain periods. The plaintiffs seek relief under the federal Fair Labor Standards Act and New York Labor Law.

Since at least 2001, W.D. Henry & Sons, Inc. has recruited and profited from the labor of U.S. citizen residents of Villalba, Puerto Rico who have reliably traveled each season at their own expense to upstate New York and worked long hours in the company’s fields and packing facilities.

Beginning in 2016, W.D. Henry & Sons, Inc. began to take steps to replace their U.S. citizen Puerto Rican employees with temporary foreign guest workers under the H-2A visa program. Under federal law, agricultural employers are prohibited from displacing U.S. workers in favor of foreign guest workers. Moreover, all U.S. employees are entitled to the same benefits and working conditions as their H-2A guest worker counterparts. Seeking to evade these legal requirements, W.D. Henry & Sons, Inc. drastically reduced the work hours of its U.S. citizen employees, misrepresented the rights of U.S. workers to higher paying employment opportunities provided to H-2A guest workers, summarily evicted U.S. farm workers from their housing to make room for H-2A guest workers, withheld wages from U.S. workers in order to coerce them into signing false declarations as purported evidence of abandonment of their jobs, and failed to recruit and re-hire their U.S. workers as required by law. The company did this during the same time that their Puerto Rican employees’ home community was devasted by Hurricane Maria, when they were in desperate need of employment.

See our full press release in English or Spanish.

Thank you to all our supporters! 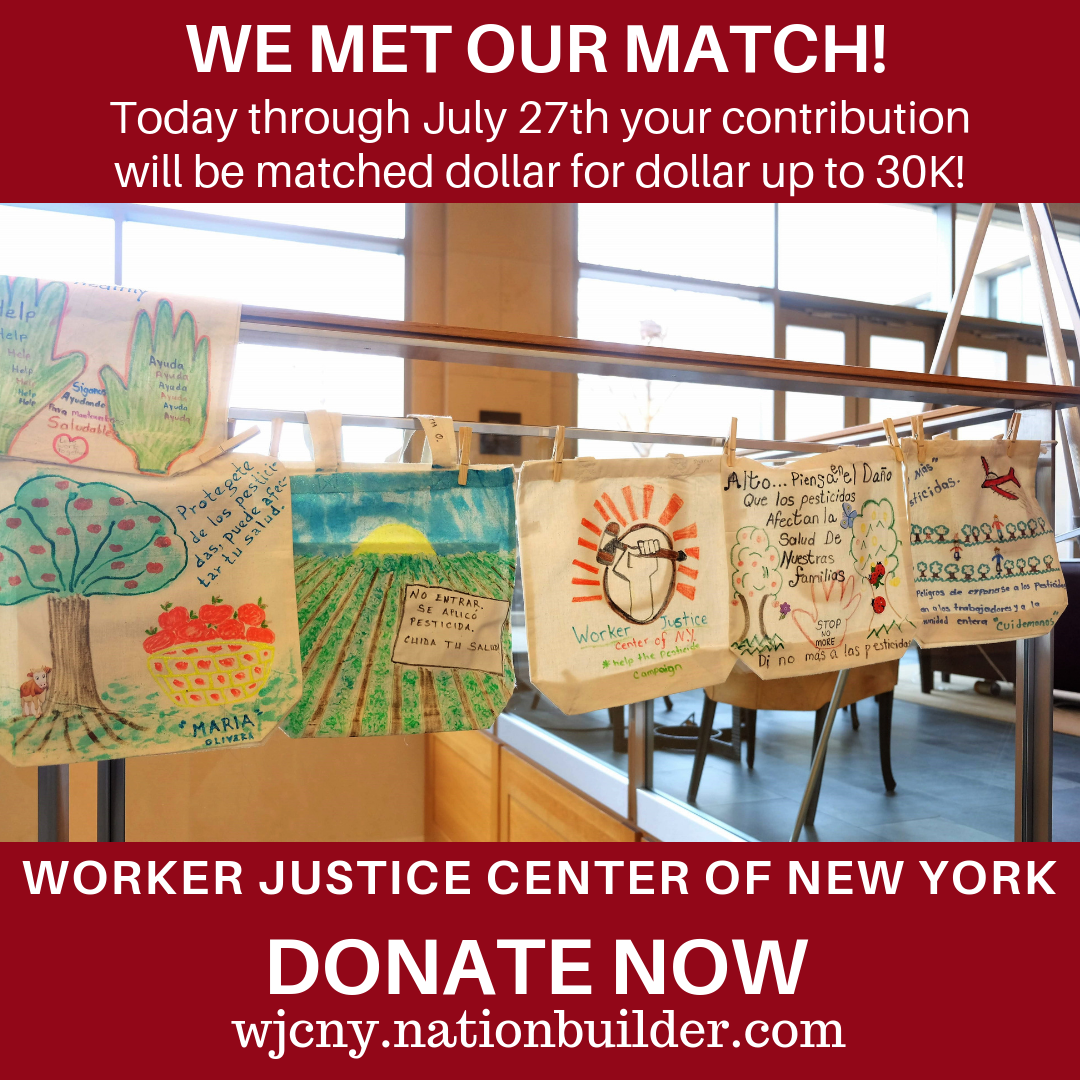 With your generous support, WJCNY raised over $75K this summer during our first-ever grassroots fundraising drive--far exceeding our expectations. On behalf of the entire staff and board of WJCNY, we want to thank the many donors and volunteers who helped make our grassroots fundraising drive such a tremendous success. Your contributions will help us rise to the challenges ahead and fight back head-on against the barrage of attacks aimed at farmworkers and immigrant communities throughout our state. 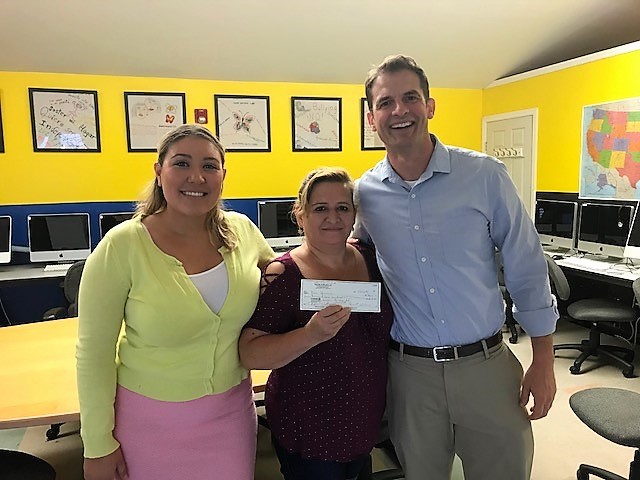 For nearly two years, Rosa Herrera worked at Panaderia Y Café La Chapincita in Mamaroneck, NY, where she regularly worked two kitchen shifts per day--often six or seven days per week--but was paid less than the New York State minimum wage and was never paid overtime. Rosa complained to her boss but was ignored. She eventually sought help from the Community Resource Center (CRC) where she knew free, trustworthy assistance was available for low-wage, Spanish-speaking workers like herself. The staff at CRC soon connected Rosa to attorneys at WJCNY. Courageously, through her WJCNY attorneys, Rosa filed suit against her former employer in New York State Supreme Court. After several months of legal proceedings, Rosa succeeded in obtaining a favorable settlement by which she recovered more than $30,000 including her earned but unpaid wages. Rosa is pictured here with CRC Co-Director, Jirandy Martinez (left), and WJCNY Legal Director, Rob McCreanor (right).

Since at least 2012, the Piedimonte business, a large-scale agricultural and produce packing, storage and distribution enterprise, has flagrantly violated the rights of hundreds of its migrant and seasonal workers, failing to pay them even the required minimum wage under federal and state law and uniformly denying overtime pay to workers who labored sometimes more than seventy hours in a week. At the same time, Piedimonte has increasingly sought to import foreign laborers under the federal H-2A foreign guestworker program, replacing local and domestic U.S. workers with temporary visa-holders whose presence, mobility and activities are tightly controlled by Piedimonte. 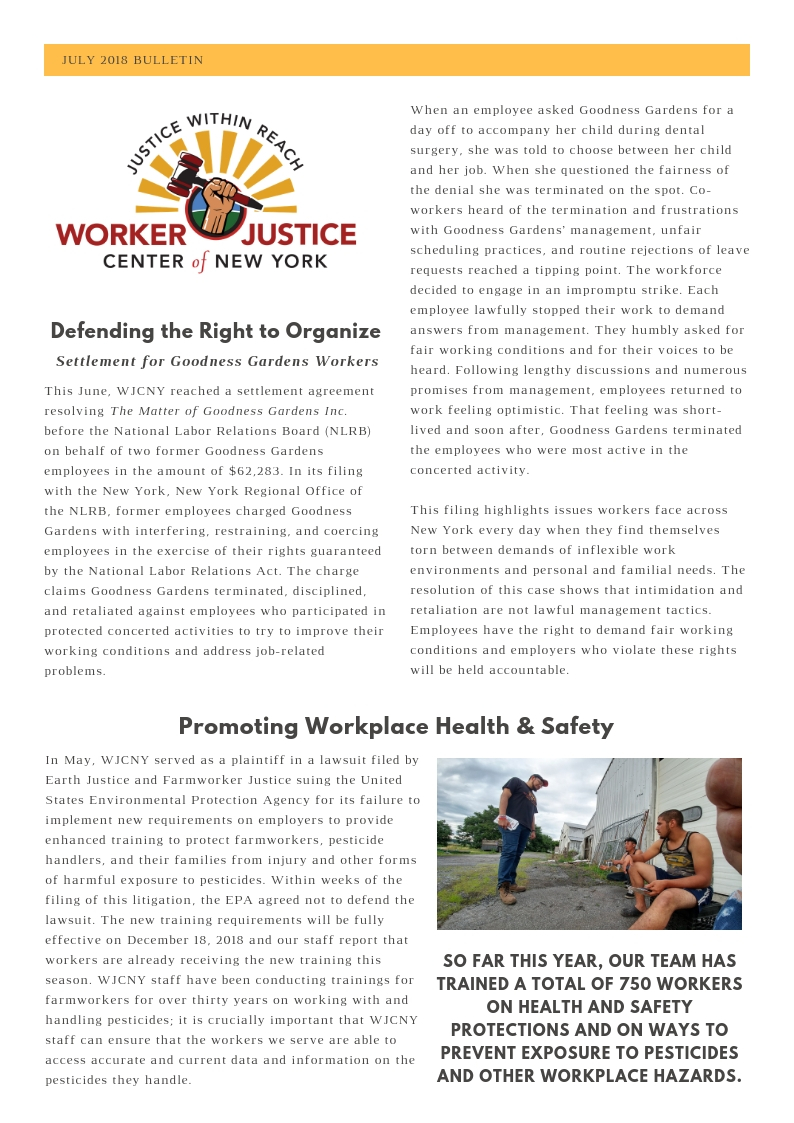 Check out what we've been up to. You can download our most recent newsletter here!

WJCNY has reached a settlement agreement in the amount of $62,283, resolving The Matter of Goodness Gardens Inc. before the National Labor Relations Board. In its filing with the New York, NY Regional Office of the NLRB, two former employees charged Goodness Gardens with interfering, restraining, and coercing employees in the exercise of their rights guaranteed by the National Labor Relations Act.

The charge claims Goodness Gardens terminated, disciplined, and retaliated against employees who participated in protected concerted activities to try to improve their working conditions and address job-related problems. When an employee asked Goodness Gardens for a day off to accompany her child during dental surgery, she was told to choose between her child and her job. When she questioned the fairness of the denial she was terminated on the spot. Coworkers heard of the termination and frustrations with Goodness Gardens’ management, unfair scheduling practices, and routine rejections of leave requests reached a tipping point. The workforce decided to engage in an impromptu strike. Each employee lawfully stopped their work to demand answers from management. They humbly asked for fair working conditions and for their voices to be heard. Following lengthy discussions and numerous promises from management, employees returned to work feeling optimistic. That feeling was short-lived and, soon after, Goodness Gardens terminated the employees who were most active in the concerted activity.