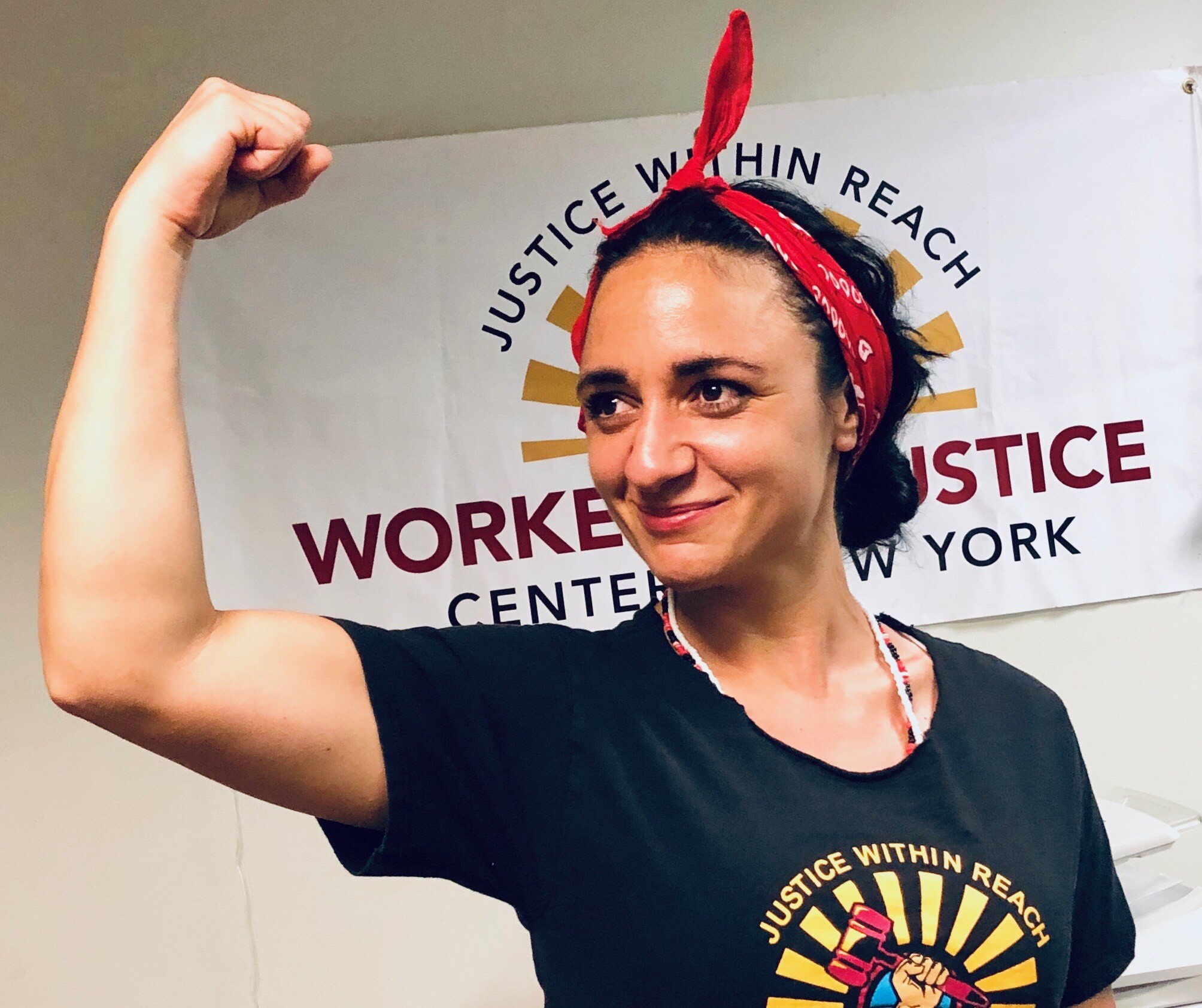 "WJCNY works with some of the most vulnerable survivors of domestic violence – undocumented workers. For undocumented workers, barriers to leaving abusive relationships include immigration status, fear of deportation for themselves or family members, language access to systems of care, and cultural barriers in close-knit undocumented communities..." 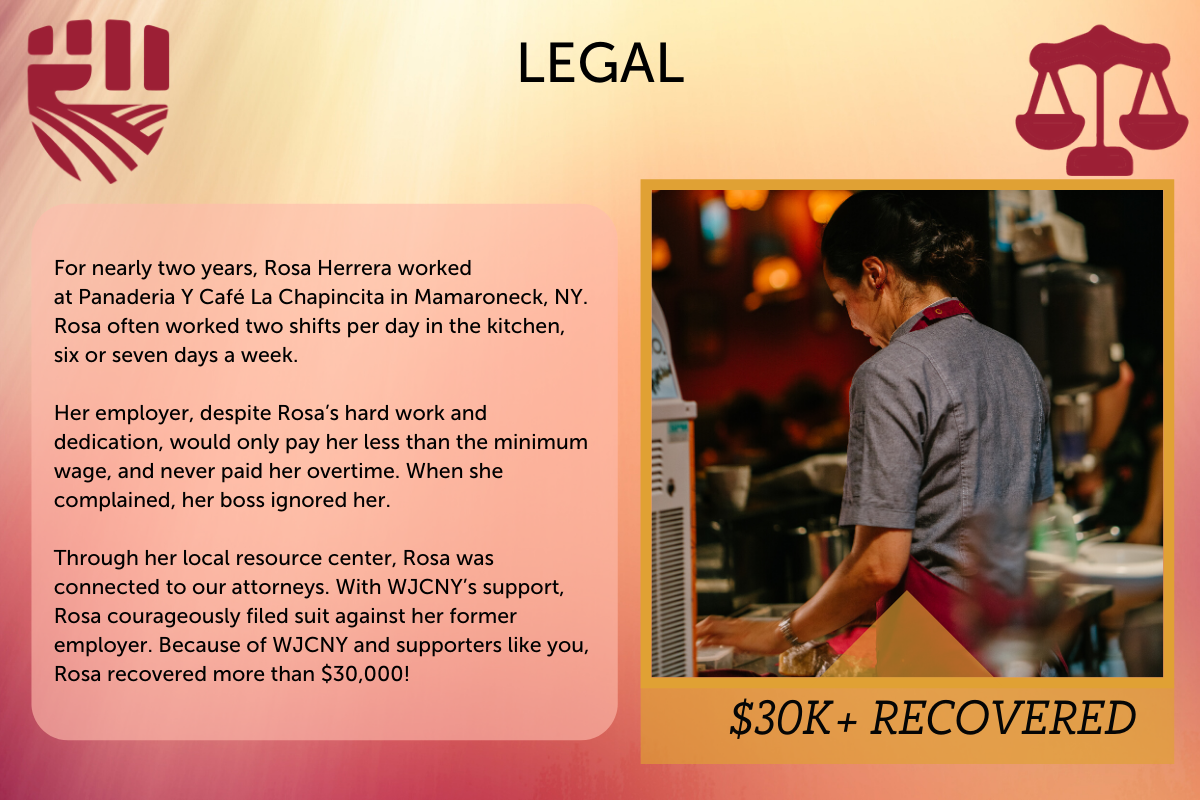 "Over the past 18 months, WJCNY has focused on strategic, high-impact legal assistance to low-wage and agricultural workers throughout New York State..." 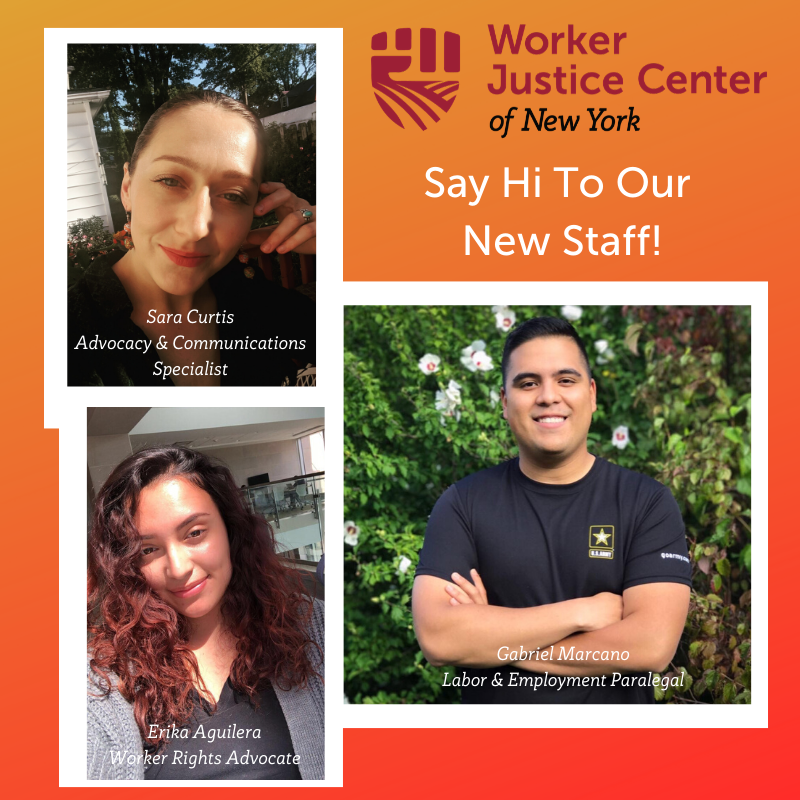 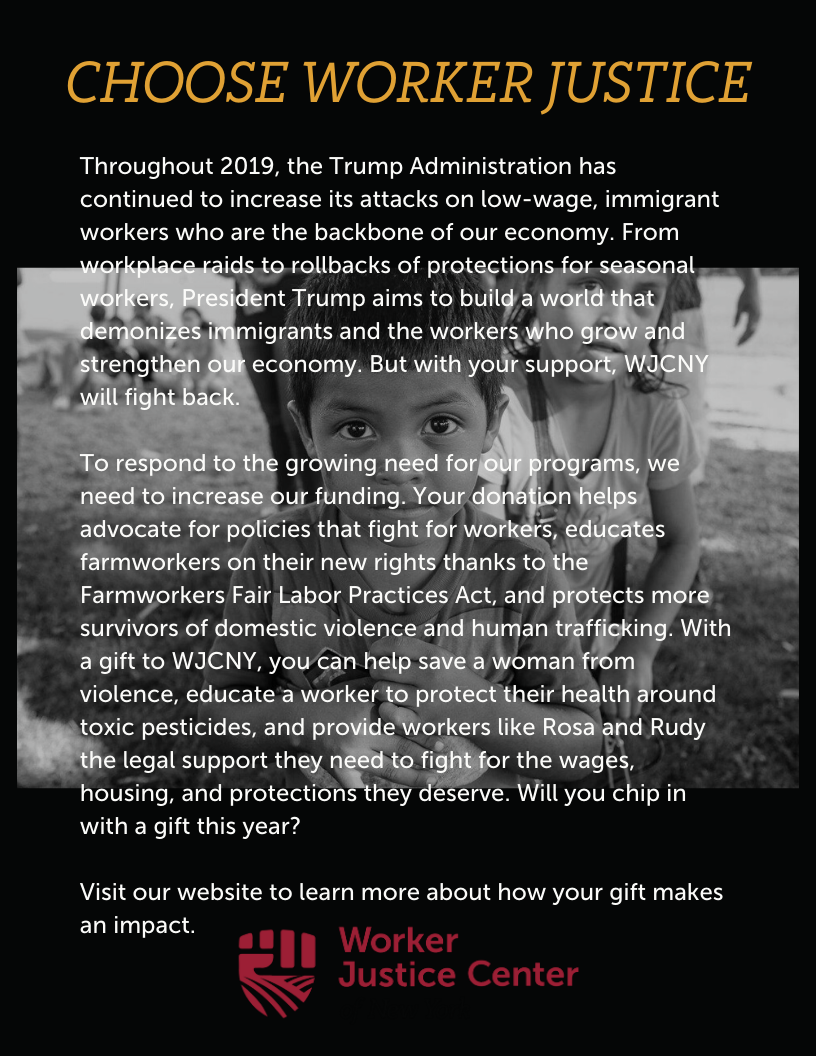 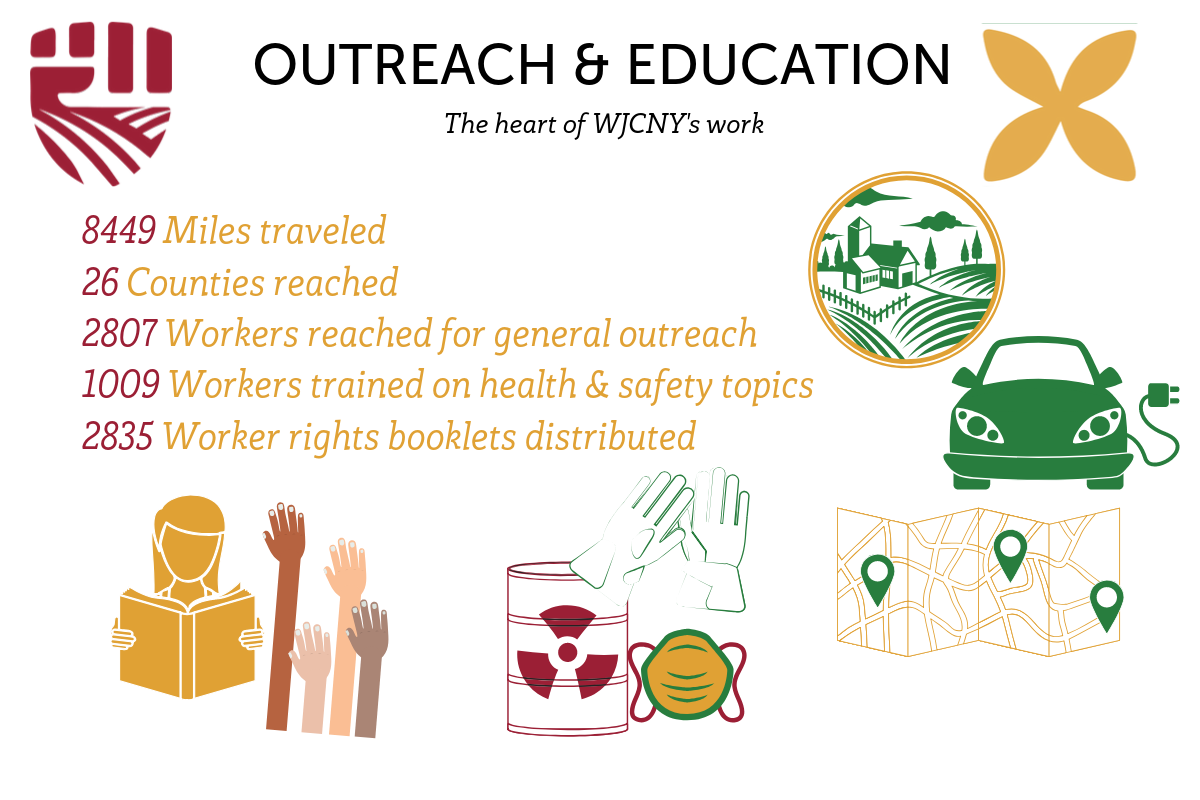 Autumn update from Outreach and Education, by Irene Sanchez.

"Driving across New York State performing outreach to agricultural workers has its perks: beautiful sunsets, the glaze of snow in the winter, the bloom of the apple trees in the spring and colorful autumn landscapes..." 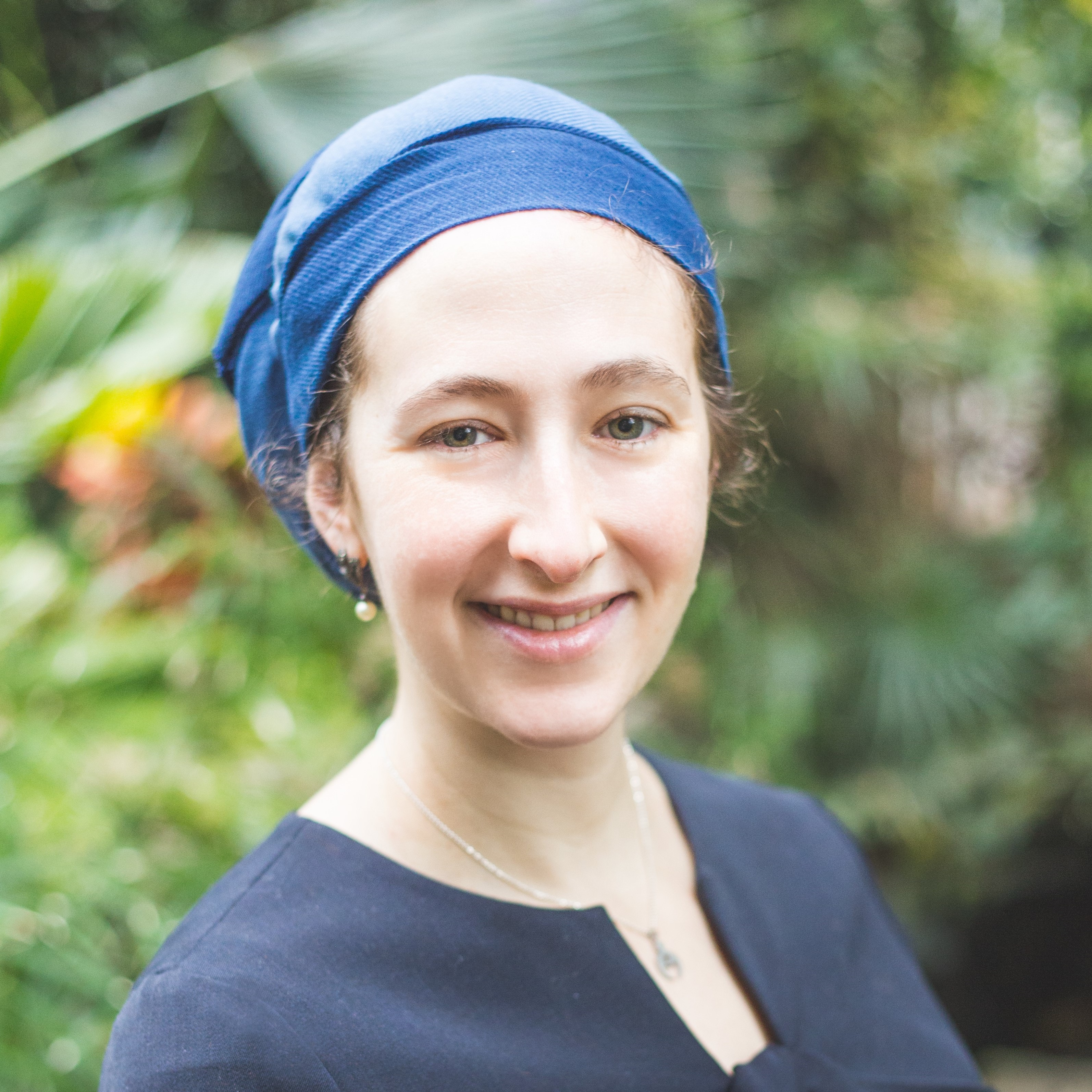 WJCNY executive director, Lauren Deutsch, has been named in City & State New York magazine's Labor Power 100 - a recognition of the state's most influential labor leaders. “I’m honored to be a part of the team at Worker Justice, building power with the workers who are the foundation of our larger New York community. City and State’s inclusion of our work is deeply gratifying, as is sharing this honor with all the amazing leaders transforming Labor in NY," said Deutsch. In this inaugural year of the magazine feature - its release timed with Labor Day - NY's labor leaders are recognized alongside the many victories won in 2019 impacting the labor movement were also highlighted. WJCNY is proud to have played integral roles in the passage of the Green Light NY legislation and the Farmworker Fair Labor Practices Act, long-fought battles to win rights for predominately immigrant workers.

WJCNY filed a New York Human Rights Law lawsuit on July 10, 2019 on behalf of Javier Amigon against KTF Enterprises, Inc. and Kirker Enterprises, Inc. in Orange County New York State Supreme Court. Javier Amigon is an individual with a disability with a below the knee left leg amputation and a partial right foot amputation who was a long-term, highly reliable factory worker in Defendants’ international large-scale beauty supplies production and distribution business. Mr. Amigon performed his job responsibilities as a line-worker faithfully for many years while having access to a stool as a reasonable accommodation.

In the summer of 2015, Defendants acquired the company and production facility where Mr. Amigon had served as a long term employee. Shortly thereafter, they callously threw Mr. Amigon’s stool into the garbage and forced him and other employees to stand while performing their job responsibilities. Mr. Amigon pled for continued access to a stool, provided numerous doctors’ notes, and sustained serious injuries while fighting to keep his livelihood during his attempts to work standing up. He was denied this simple and economical accommodation, his doctors’ notes were ignored, he was forced out of work, and he was ultimately terminated on July 11, 2016.

Under New York State Human Rights Law, Executive Law 290, et. seq., employees with disabilities are entitled to reasonable accommodations that enable them to perform the essential functions of their job. The NYSHRL also prohibits employers from discriminating against a qualified individual on the basis of their disability. Click here to read the full complaint. 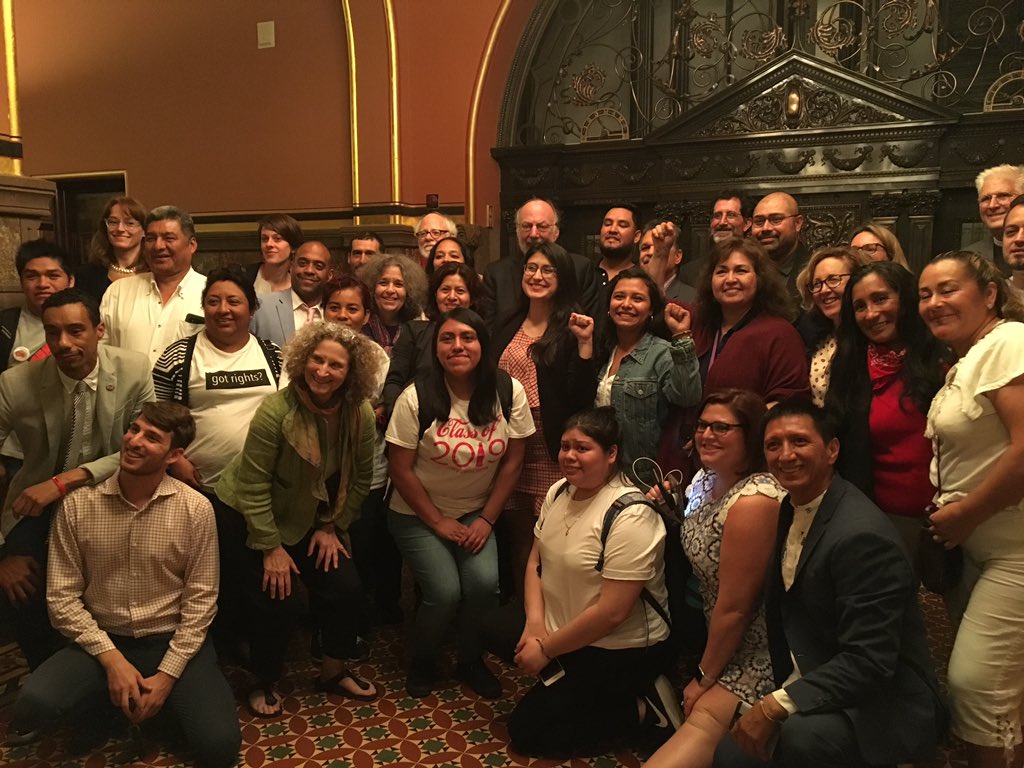 The WJCNY staff and board are beyond overjoyed this week with some long-overdue legislative wins! The passage of the “Green Light NY” bill permitting access to driver’s licenses for undocumented immigrant New Yorkers along with the Farm Laborers Fair Labor Practices Act were long-overdue victories for NY’s immigrant farmworker communities.

This are historic wins! An estimated seven-hundred fifty-thousand individuals in NY stand to benefit from the life-altering ability to identify oneself with a state-issued I.D, to apply for a driver license and purchase insurance, to access their children's schools, churches, medical appointments, grocery stores, and increase social integration in their communities. The human impact of being able to access driver licenses is immeasurable for NY's immigrant communities.

Further, the estimated eighty-thousand farmworkers who work on New York farms will finally be ensured overtime pay, the right to organize their workplaces and collectively bargain and the right to a day of rest, among other protections. A remnant of the Jim-Crow era, the nearly ninety years of exclusion of farmworkers from these essential labor rights has finally been remedied and the dignity and of the agricultural workforce duly recognized and respected.

WJCNY thanks all of our coalition partners across the state who worked tirelessly for years for passage of these bills. We further express our sincere gratitude to legislative bill sponsors Senators Luis R. Sepúlveda and Jessica Ramos as well as Assembly Members Marcos Crespo and Catherine Nolan and finally, to Governor Andrew Cuomo for his leadership in making NY a place that truly welcomes and embraces our immigrant neighbors and friends.

Mr. Hatfield, who lost his hearing at a young age, was thrilled when he and his wife found an advertisement for dairy work in Central New York. Mr. Hatfield longed for an opportunity to return to Herkimer County where he was born and raised. He didn’t bargain that his return would be conditioned upon exposing himself to severe labor abuses; a grueling seven day, eighty-plus hour work-week schedule and living in unsafe and uninhabitable housing. Throughout the duration of his employment, he was paid less than three dollars per hour while required to live in on-site, overcrowded and substandard housing with his wife and ten-year-old child. He performed a broad range of arduous tasks for Defendants, including non-agricultural work.

On the matter from WJCNY is staff attorney John Marsella, assisted by paralegal Gabriel Marcano. Click here to read the full complaint. 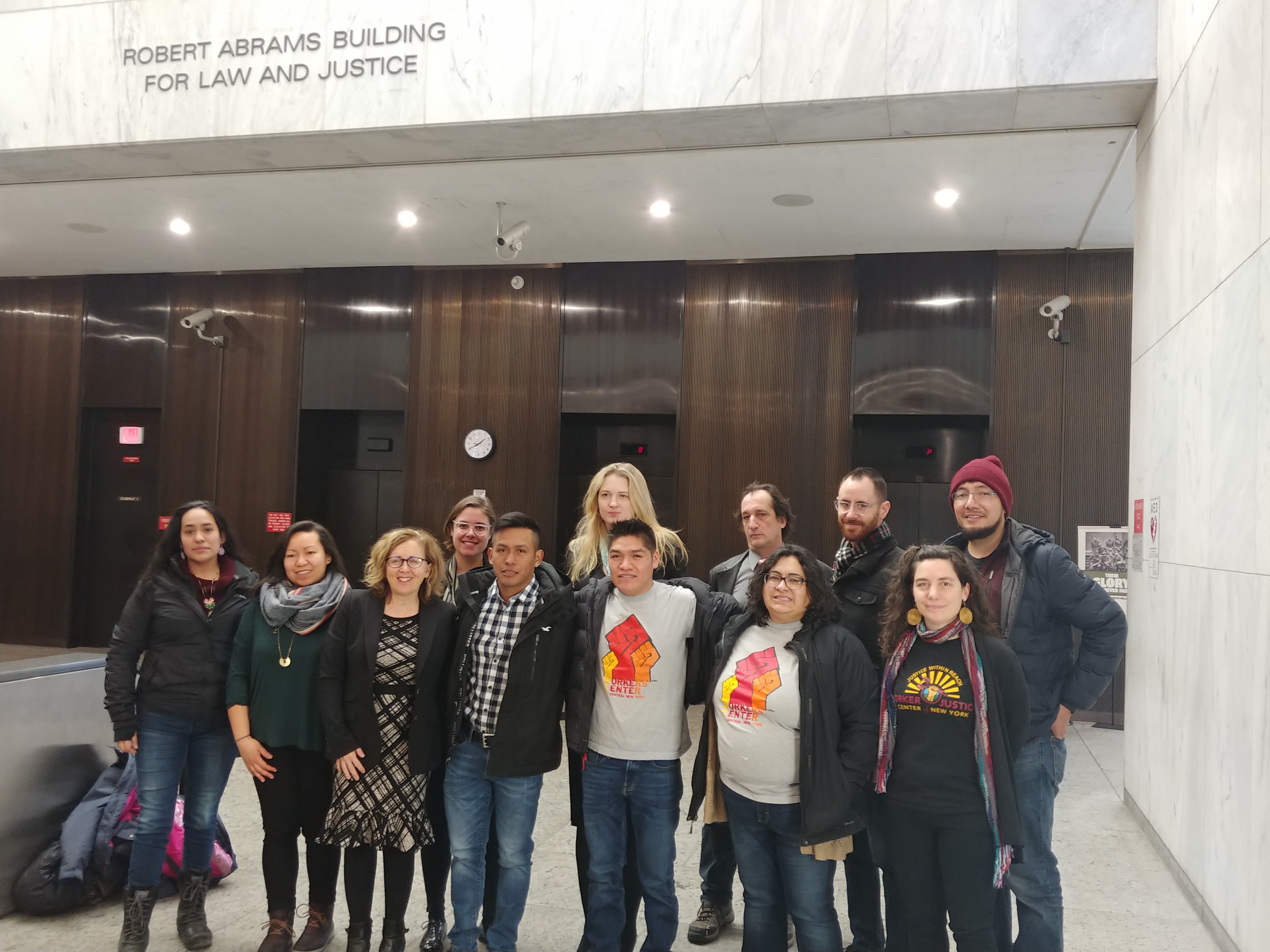 ALBANY - A state appellate court today declared unconstitutional a Jim Crow-era exclusion in state law that denies farmworkers the right to organize and collectively bargain. Plaintiffs Crispin Hernandez, the Workers’ Center of Central New York and the Worker Justice Center of New York, represented by the New York Civil Liberties Union, originally challenged the exclusion of farmworkers from basic labor protections in 2016.
“This is a victory for farmworkers, as we have finally had our day in court,” said Crispin Hernandez, who was fired from his job as a dairy worker in Lowville, NY in 2015 after his boss saw him meeting after work with co-workers and human rights organizers to discuss workplace conditions. “All workers deserve to have a voice and be heard at their place of work, and farmworkers deserve to be treated with respect and dignity.”
Under the New York Constitution, all workers have a right to organize and collectively bargain. Yet since the 1930s, farmworkers have been excluded from those basic workers’ rights by a carve out in the State Employment Relations Act. This carve out is a carryover from a New Deal legislative compromise with segregationist Congressmen to exclude farmworkers and domestic workers, who were predominantly Black at the time.
“Today, the court recognized that farmworkers are entitled to the same rights as all other workers in New York state,” said Rebecca Fuentes, lead organizer with the Workers’ Center of Central New York. “Farmworkers make essential contributions to New York and to all of our lives. Their labor produces the food, nutrition, and money that sustain our economy and our communities.
When the plaintiffs initially filed suit in May of 2016, both Governor Andrew Cuomo and the state Attorney General publicly agreed that excluding farmworkers from the right to organize conflicts with the state constitution. Both declined to defend the lawsuit in court. However, the New York Farm Bureau requested that the court allow it to intervene to defend the law as a party in the case, and in January 2018, a state court granted their motion to dismiss the case. The New York State Attorney General’s office jointed the plaintiffs in appealing to the Third Department, arguing that the exclusion of farmworkers from collective bargaining is unconstitutional. The Third Department Appellate Division heard arguments on the case in February 2019.
“Today’s ruling shows that justice is clearly on the side of farmworkers,” said Andrea Callan, managing director of the Worker Justice Center of New York. “For many decades, each time farmworkers and their allies have advocated for much-needed changes to laws governing their labor rights, the Farm Bureau has used its power and influence to lobby New York lawmakers to preserve the status quo and leave farmworkers in a position of vulnerability. We expect the bureau will appeal and we will keep fighting until we win full equal rights.”
Alongside today’s ruling, state lawmakers are considering legislation that would grant farmworkers the same rights as almost all other hourly workers in New York in addition to collective bargaining. These include overtime pay and a day of rest. Though such legislation has passed the state assembly in prior years, it now has a majority of sponsors in the state senate for the first time.
“The court’s ruling today was unequivocal that denying farmworkers basic labor rights is flat-out unconstitutional, and farmworkers, like other workers, have the right to organize,” said NYCLU Executive Director Donna Lieberman. “The workers on whom we depend for the food on our tables have the right to be treated humanely and with dignity, like any other hardworking New Yorker.”
Even though farming in New York is a multi-billion dollar industry, farmworkers often earn wages well below the poverty level, and many live in overcrowded labor camps and toil under sweatshop-like conditions. The combination of poverty, isolation, and lack of permanent legal status and language access makes farmworkers among the most exploited groups in the American labor force.
“The language of the New York Constitution is very clear: all employees have the right to organize,” said Erin Beth Harrist, lead counsel and senior staff attorney at the NYCLU. “The exclusion of farmworkers from this constitutional right in New York is against our values and our laws.”
https://www.nyclu.org/en/press-releases/appeals-court-recognizes-farmworkers-have-fundamental-right-organize