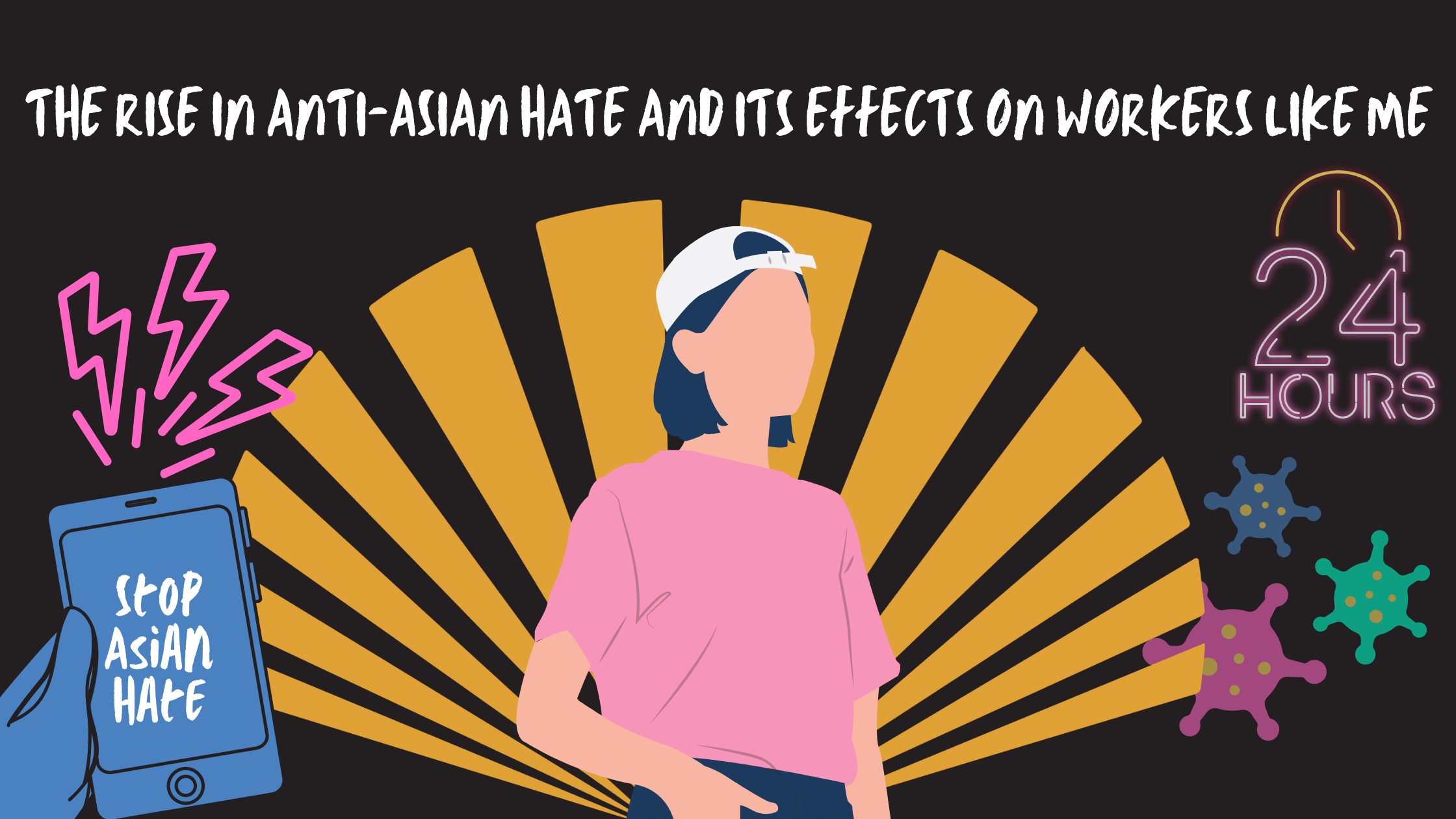 After the horrific shootings in Atlanta, one of our Spring interns was compelled to write the following blog post to share her story. We thank her for her testimony and her powerful words. We have respected the request to keep this blog anonymous.

America prides itself on being a cultural melting pot. Yet, discrimination toward immigrants and people of color is an everyday occurrence. As an intern at Worker Justice Center of New York, I expected that I would support programming that helped immigrant workers, but I am coming to understand through this experience how often workplace violence and wrongdoing is caused by racism. My own experience as a person of Asian descent working in the food service industry, amidst the current rise of anti-Asian hate, helped fuel this realization.

To be honest, even now, I’m having a hard time acknowledging that the Georgia spa shooting was actually covered in mainstream media. It’s a weird feeling seeing it addressed as a public matter, and a corner of my mind is telling me to not get my hopes up because nothing ultimately will be accomplished. There will be a brief period where everyone seems to care, when the press decides to prioritize the incident for attention, and then the issue will be forgotten.

It’s a pessimistic view, I know. But it’s a coping mechanism.

Last March, when COVID-19 became a global issue, my mother’s calls became more frequent. According to the Center for the Study of Hate and Extremism at California State University, San Bernardino, the first spike of anti-Asian hate crimes occurred in March and April of 2020 amidst the negative stereotyping of Asians relating to the pandemic. She was worried for me - less about COVID itself - but more that someone was going to harass me on my college’s campus because of my race. I reassured her that 20% of my college population was Chinese, and that everyone was friendly.

Besides, surely most people were logical enough not to blame an entire ethnicity based on where a tragic virus originated. My initial thought was that my mother was using WeChat too much again. WeChat is a popular  social media and news app used by many in the Chinese immigrant community. It covers stories about crimes committed in Asian neighborhoods, such as an elderly man beaten half to death while delivering food or restaurants destroyed without explanations. My mother followed the coverage closely because these stories were largely absent from mainstream news, but I thought it caused too much anxiety.

I don’t need to read WeChat to know what’s going on. I’ve received demeaning remarks before. It’s pretty common. I think I should have expected this since I work in a Chinese restaurant, but I don’t like to remind myself. I want to contribute the remarks to naivety, since most of these ‘pranks’ are done by adolescents. Things like calls from people laughing and asking, “You guys put stray cats in your food, right?” And sometimes people with the audacity to already believe in the stereotype asking, “Why do you guys put strays in your food?” I’ve dealt with this everyday racism in addition to the usual harassments related to the experiences of a fast-food worker. Phone calls that start with cusses, or in a tone that’s obviously meant to ridicule a person, or sexual comments made toward me when I was just a middle school child.

Unfortunately, the reality is - that’s not so bad. My mother told me there will always be ignorant people in the world, and it can feel like a waste of energy to get angry. The comments are temporary, but at the same time I hope that I’m the one who pick up those calls and not her.

These moments are scattered across my young lifetime. I’ve come to expect racism and workplace harassment every couple of months.

Except, with COVID-19, things went from every couple of months to all the time. The discontent is so thinly veiled that I wonder sometimes why people don’t directly say what they mean. People commenting “They deserved it” under videos of students outcasted, a girl getting spit on while she was taking out trash, or a father getting stabbed in front of his son at a grocery store. They were blamed for a global pandemic just because they looked a certain way.

Last year, this blame hit close to home. A man barged into my uncle’s restaurant a couple blocks up the street from ours and poured gasoline over the storefront. While the horror stories I read were filtered by a screen, this hate crime had seeped into my life, increased in potency, and was here to stay.

My family are proud business owners and restaurant workers. We love the Hudson Valley and our city. There is a misconception that Asians are a model minority and not subject to racism or hate. That’s hardly the case for many.

As an Asian immigrant family, racism is only another issue that we deal with on a long list of hardships. We are humans that deserve respect, and the unnecessary hate is often directed toward an innocent worker trying to support their family.

Right now, I want to tell the Asian community that I understand. Times are tough, and it seems like the racism is getting worse. I can’t promise that it’ll get better, and a part of me stubbornly refuses to believe that it’ll get better after my hopes have been disproven so many times. I’m glad groups like Worker Justice Center of New York are here to stand up for all workers and reject racism and hate.

Racism won’t be abolished anytime soon, but we will persevere.