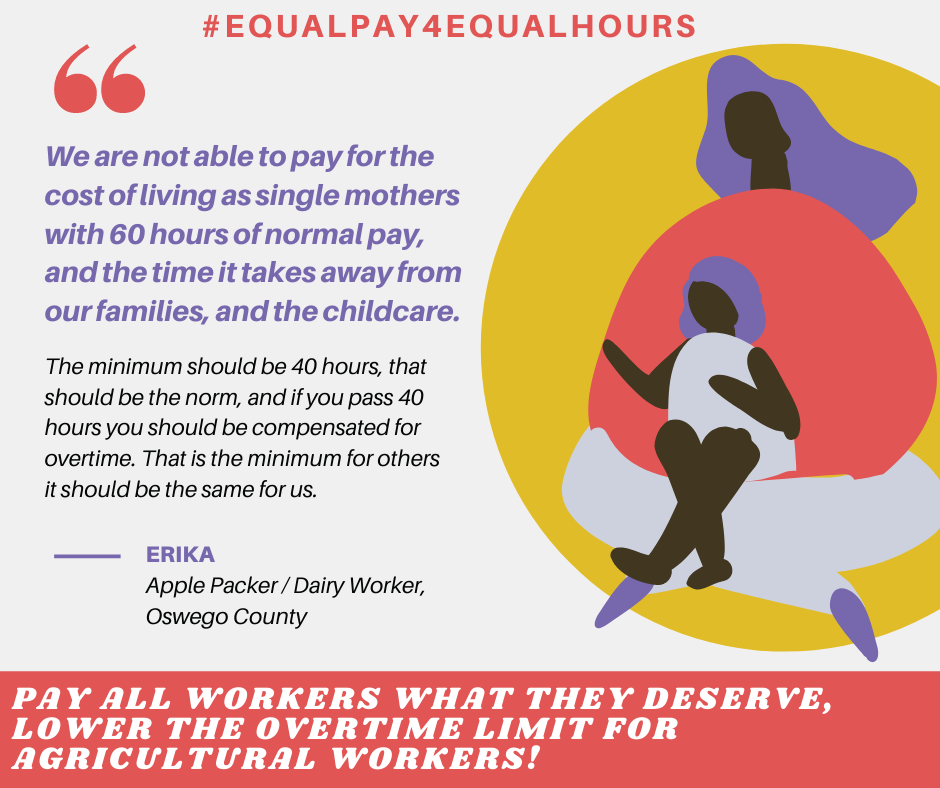 The Farm Laborers Fair Labor Practices Act was the result of years of organizing and lobbying by farmworkers and allies from across the state, as well as an appellate court ruling that farmworkers have a state constitutional right to organize. The case was brought by Crispin Hernandez, Workers’ Center of Central New York, and the Worker Justice Center of New York, with representation by the NYCLU.

In response, the following organizations offer comments on the recommendation:

“The workers on whom we depend for the food on our tables must be treated with dignity and afforded the same basic workplace protections as other New Yorkers. We urge Commissioner Reardon and state lawmakers to reject the wage board’s recommendation, which perpetuates Jim Crow-era injustice and discrimination against farmworkers that the Farm Laborers Fair Labor Practices Act was supposed to reverse. Farmworkers have waited 80 years for the Jim Crow-era discrimination they face to end. They should not have to wait a single year more. The NYCLU will continue to stand with farmworkers in the fight for equal workplace protections, fair compensation, and basic rights across New York State,” said Donna Lieberman, executive director at the New York Civil Liberties Union.

"At a time when politicians laud essential workers as heroes and many industries have implemented hazard pay, it’s a disappointing and bitter irony that the Wage Board chose to use the pandemic as a justification for continuing to devalue the work of farmworkers. As one of our farmworker members stated in his testimony, “this is a matter of being a good human,” and we’ll continue fighting for equality for farmworkers in 2021,” said Jessica Maxwell, executive director of the Workers’ Center of Central New York.

“Today in the middle of a global pandemic, when farmworkers are finally recognized as essential workers, the NYS Wage Board failed farmworkers and voted to keep the overtime threshold at 60 hours. For too long farm owners have benefited from the exploitation and exclusion of their workers from basic labor protections such as overtime pay. Although the Farm Laborers Fair Labor Practices Act provides some protections for farmworkers, the fight is not over. The overtime threshold should be 40 hours, and we will continue to fight until farmworkers in New York win the long overdue protections they deserve,” said Fabiola Ortiz Valdez, lead organizer at the Food Chain Workers Alliance.

“We are deeply disappointed by the Wage Board’s decision today. Throughout 2020, NY’s farmworkers have risked their lives day in and day out, to put food on our tables. Despite being essential workers, our state’s labor law still treats them as second class. Farmworkers deserve overtime pay after 40 hours. How long will Governor Cuomo let this inequity stand?” said Emma Kreyche, Director of Advocacy, Outreach and Education at the Worker Justice Center of New York.

"Farmworkers labor under harsh conditions and engage in intensive physical activity to feed all of us, an essential role as we continue to battle the coronavirus pandemic. While we are greatly disappointed in the decision of the NYS Farmworker Wage Board, we will continue to advocate for overtime pay equity and ensuring farmworkers are treated humanely, with dignity and respect,” said Frankie Miranda, President and CEO of Hispanic Federation.