International Workers' Day & the State of the American Labor Movement 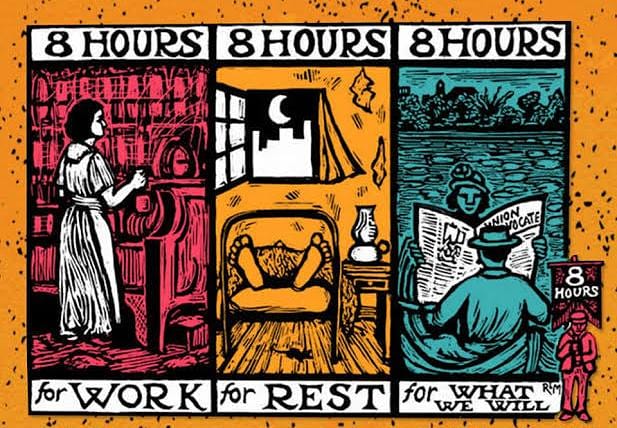 International Workers’ Day, also known as May Day, is a day to honor the historic struggles and gains made by workers and the labor movement, observed in most countries on May 1. Contrary to popular belief, International Workers’ Day began in the United States in the late 19th century to commemorate the struggle for an 8-hour workday and better working conditions. At the height of the Industrial Revolution, thousands of men, women and children died every year from inhumane working conditions and long hours. To try to abolish these horrific working conditions, the Federation of Organized Trades & Labor Unions (later the American Federation of Labor or AFL) held a convention in Chicago in 1884 to demand an 8-hour legal workday in the United States by May 1, 1886.

The next year, this law was supported by The Knights of Labor, the largest labor organization in the United States at the time. On May 1, 1886, more than 300,000 workers walked off their jobs in protest. The demonstration started out peacefully but on May 3, police and protestors clashed violently in the streets in Chicago. The next day, a rally was coordinated at Haymarket Square to support the dead and injured at the hands of the police officers during the skirmish. The day again started peacefully. Suddenly, someone threw a bomb into the crowd which resulted in the deaths of seven police officers and eight civilians.

This tragedy became known as the Haymarket Riot. In August 1886, with little to no evidence linking them to the crime, eight men were convicted, with seven receiving the death penalty. On May 1, 1890, over 300,000 workers led by European labour parties protested in London to commemorate the “Haymarket Martyrs.” May 1 was eventually celebrated by governments all over the world. After the infamous railroad Pullman Strike in 1894, President Grover Cleveland officially moved International Workers’ Day from May 1 to the first Monday of September and renamed it Labor Day out of fear that May Day would encourage Communism and other radical ideas. Today May Day is a national holiday in 66 countries, and celebrated in many others, but is not officially recognized in the United States where the holiday began.

The United States labor movement has dramatically declined since the 1980s. It has one of the lowest union densities (the number of union members who are employees as a percentage of all employees) in the developed world at 10.8%, down from its peak at nearly 35% in 1954. This is in comparison to Sweden at 64.9%, Denmark 66.5%, and neighboring Canada at 25.9%. Unions not only raise the wages of their members but of non-unionized workers whose companies raise wages for their employees to try to avoid the perceived threat of unionization. The United States has one of the highest levels of income inequality (the gap between the rich and the poor) in the developed world. Union density and income inequality are directly correlated. As union density has gone down, income inequality has skyrocketed. Studies show that this union decline accounts for 13-20% of the growth in inequality for women and 33-37% for men. Working people lose $200 billion per year with nearly all that money redistributed to the very wealthy.

The past year was rough  for all but it was also a year that the public began to appreciate the value of our essential workers during the pandemic. There were some positive signs for the labor movement. For the first time in years, the union density in the United States increased from 10.3% to 10.8%. President Joe Biden appointed Marty Walsh, the first labor union official in over 80 years to lead the Department of Labor. In November 2020, the Labor Caucus was started in Congress by Mark Pocan and Donald Norcross to represent the interests of organized labor. Sixty-four percent of Americans approve of unions, a 50-year-high. An MIT study showed that 48% of non-unionized workers would join a union today if given the opportunity. A pro-union bill called the PRO Act (Protect the Right to Organize Act), which would make it much easier to join a union, has passed the House and has 47 co-sponsors in the Senate. It requires just three more co-sponsors to be brought to the Senate floor for a vote. The labor movement has momentum that has not been seen in many years.

This May Day, let us remember the sacrifices and celebrate the many accomplishments of the labor movement, and continue to build toward a more just and equitable society that allows workers to work and live with the dignity and respect they deserve.