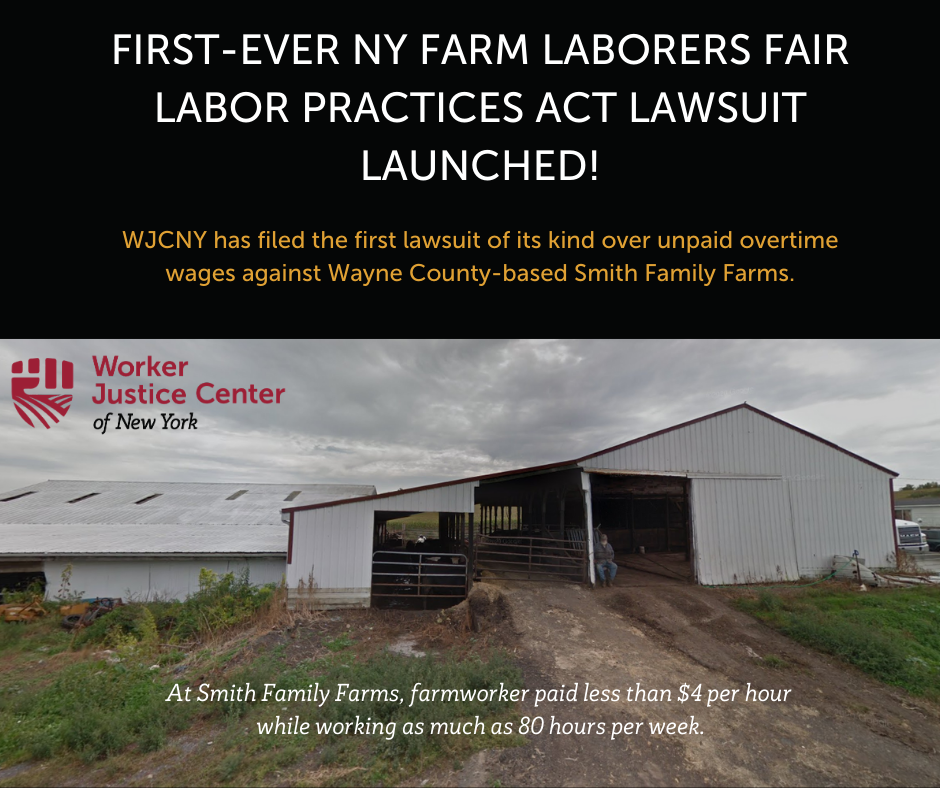 The lawsuit, filed on behalf of farmworker Robert Mein, says that Smith Family Farms willfully failed to provide him with overtime pay for hours worked in excess of 60 hours per week. This is a direct violation of New York Labor Law, as amended by the Farm Laborers Fair Labor Practices Act. The lawsuit was filed in the U.S. District Court for the Western District of New York in Rochester.

“The owners of Smith Family Farms are being held accountable for ignoring their obligations thanks to this new law that protects vulnerable farmworkers,” said John Marsella, senior staff attorney with the Worker Justice Center of New York. “We won’t stand by as employers illegally withhold pay from their employees. This is an egregious violation of our client’s rights.”

Mein was paid less than $4 per hour while working as much as 80 hours per week. The complaint alleges that Smith Family Farms also violated the Fair Labor Standards Act and New York Real Property Law.
According to the New York legislature, agriculture contributes more than $5 billion annually to the state economy. The Farm Laborers Fair Labor Practices Act, which went into effect on January 1, provides workers with the right to unionize, overtime pay, and a protected day of rest.

But without adequate enforcement, farmworkers are still at risk of exploitation. Numerous hurdles still prevent farmworkers from accessing their right to overtime pay. Language barriers, geographical isolation, fear of retaliation and lack of formal education surrounding rights all mean farmworker protections are under enforced.

“The New York State Legislature’s message was loud and clear that farmworkers are now entitled to overtime protections which so many New York employees have enjoyed for nearly a century,” Marsella added. “It’s now up to brave farmworkers and their allies to ensure farm owners received that message.”